George Shinn in 1875 was summoned once at midnight to the bedside of an old woman who lived by herself without much in the way of either money or friends and was dying. She managed to convey that she wanted some other woman to come stay with her for such time as might have left, so George Shinn and the old woman’s doctor struck out in the darkness to try to dig one up for her.

It sounds like a parable the way it is told and I am inclined to believe that if someone were ever to tell the tory of your lives and mine, they also would sound more like parables than we ordinarily suppose.

They knocked at doors and threw pebbles at second story windows. One woman said she couldn’t come because she had children. Another said she simply wouldn’t know what to do, what to be, in a crisis like that. Another was suspicious of two men prowling the night and wouldn’t even talk to them.

But finally, as the memoir of Dr. Shinn puts it, in the prose of another age,

“They rapped at the humble door of an Irish woman, the mother of a brood of children. She put her head out of the window.

They tell her the situation.

“Her warm Irish heart could not resist.

“And she did come,” accounts Dr. Shinn. “She did the best she could.”

Excerpt from: “Listening to Your Life” by Frederick Buechner for December 4th. 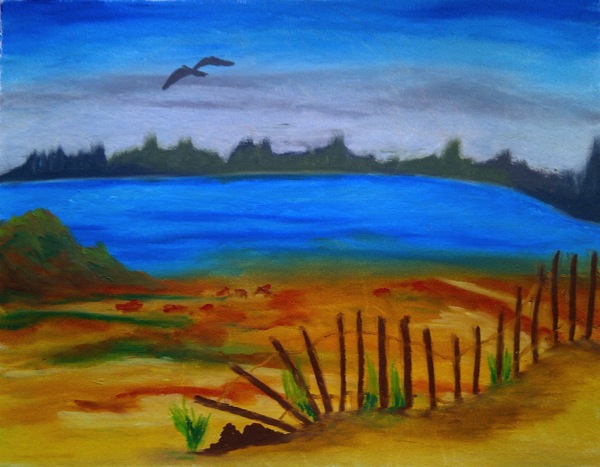 Fence on the Beach, Oil Paste