Courage in the Face of Hopeless Circumstances

To all Salma Keir fans,

A verse by Rudyard Kipling , and why WCF has a special place here:

To take your chance in the thick of a rush, with firing all about,
Is nothing so bad when you’ve cover to ‘and, an’ leave an’ likin’ to shout;
But to stand an’ be still to the Birken’ead drill is a damn tough bullet to chew,
An’ they done it, the Jollies – ‘Er Majesty’s Jollies – soldier an’ sailor too!
Their work was done when it ‘adn’t begun; they was younger nor me an’ you;
Their choice it was plain between drownin’ in ‘eaps an’ bein’ mopped by the screw,
So they stood an’ was still to the Birken’ead drill, soldier an’ sailor too! 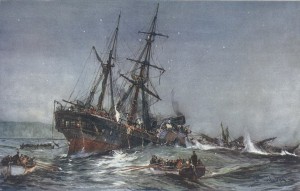 At 02:00 AM on 26 February, 1852 the HMS Birkenhead troop ship struck a rock that lies near Danger Point, Western Cape, South Africa. As the ship’s captain barked orders, setting anchors and manning the pumps, Colonel Seton commanded his troops to “stand fast”, making way for: