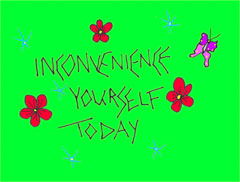 As I sit watching people come in and out of the coffee shop, in a hurry, buzzing around, taking coffee that is not made for them in their hurry, or tripping over someone’s outstretched leg, I am saddened.

It would have taken her two extra seconds of inconvenienced delay to check and make sure that the coffee on the bar was prepared for her. Instead she took what was there without checking, walked out, realized that it was the wrong drink and stormed back in, demanding her own. This left the other customer without a drink and waiting for another and the worker making two new drinks one for the irate woman who was wrong in the first place and the customer already waiting.

Yes, irritating! Just telling it is irritating is it not?

Then, Mr. Wonderful who could not move two steps out of the way tripping on the long legs stretched out then spilling his coffee. He even glared at the sitting man. If he had inconvenienced himself just a tad and moved over a couple of steps, he would have avoided that disaster.

Unfortunately, we have come to the point of a rude unrelenting self centered state of mind that we cannot get out of our own way to get what we want.

Notice that all she had to do was ask if that drink was hers. Yet, her fixation on having what she wanted that moment created a domino affect to tumble over everyone involved including herself. Not nice.

He could have moved but why should he? This was the way he intended to go out and nothing would get in his way.