Ever see someone crossing the street looking at their IPHONE and texting, not looking up once as they cross? Damn there be some real dimwits in this world.
Annoyed Driver END_OF_DOCUMENT_TOKEN_TO_BE_REPLACED 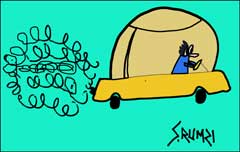 Dear Baba Rumcake, I smoke. I have friends who don’t smoke. Sometimes I’ll finish a cigarette and then get into a friend’s car. I will tell them first “I just had a cigarette and smell like smoke”. They always say “Oh just get in.” Is this rude of me? Should I refuse to get in so I don’t stink up their car? I’m not smoking in their car but you can smell it on me Stinky Smoker END_OF_DOCUMENT_TOKEN_TO_BE_REPLACED

Dear Baba Rumcake,
I was tipsy then met this guy. We exchanged numbers and now he’s called me twice in the past 2 weeks leaving voice messages. I’m really not interested in seeing him.
I really don’t want to call him to tell him I dont want to see him.
Should I just keep ignoring him and eventually he’ll get the hint and stop calling?
Yes I shouldn’t have given him my number in the first place, but he was kind of cute and I was a little drunk.
Too Drunk to Think
END_OF_DOCUMENT_TOKEN_TO_BE_REPLACED

Dear Baba Rumcake,
My one dog keeps lick my other dog’s butt.
Is this rude in terms of dog behavior? Should I separate them or go into the other room as if nothing happened?
Distressed Dog Caregiver
END_OF_DOCUMENT_TOKEN_TO_BE_REPLACED

Dear Baba Rumcake,
I’m at a bar and someone I’m talking to asks, “So, if I give you my number will you call me?”
I responded with a simple smile of flattery and a verbal “No.”
He thought I was rude for saying that and told me so. I resisted saying he was rude for asking such a loaded question.
So, which is ruder?
Tell the person no, you won’t call him. It might hurt their feelings, but they know where they stand.
Tell the person yes, you’ll call and then let them wait for a phone call which will never come, and eventually causes them to think you’re a jerk for making an empty promise.
Bar Room Confused END_OF_DOCUMENT_TOKEN_TO_BE_REPLACED