The idle tramps always felt sure they could get a copper from Seth; they scarcely ever spoke to Adam. Adam Bede by George Eliot.

Reading those words I was mesmerized by the strength of the description. The showing instead of the telling of how forboding Adam’s character and looks were.

I read this to my beloved husband who does not read nor like old English Literature. He looked at me and said, “Poor Adam.”

To which I replied, “Poor Adam? No no. Listen to the words.”
So, I read it again. He nodded in agreement.

“Yes,” he stated, as matter of fact as he always was, “poor Adam must be a dweeb and the tramps don’t to go near him.”

Befuddled, I tried to understand what he was saying. Then it hit me. My dear husband thought that tramps were bad girls, the new fangled word for a woman of ill repute.

After the confusion lifted and my tears stopped rolling down my face, I explained that tramps in this instance were the poor folk who come to the door for food or drink. The confused look remained on his handsome face.

“Homeless people, Honey, you know. Those people who beg for food?”

As understanding dawned on him, he was disgusted with the language not with his misunderstanding.

So there you have it the old vs. the new. What is there to tell? One person’s classic is another person’s trash. 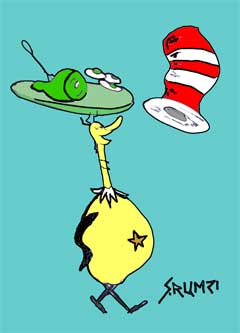 Brilliant man. There is so much to say on this intelligent and wonderful man who grabbed the minds and hearts of so many of us, grown ups and children alike.

Repetition, cadence and rhyme no matter how absurd caught out attention and that of our little ones who would march around the house reciting the words over and over. END_OF_DOCUMENT_TOKEN_TO_BE_REPLACED

Dear Baba Rumcake,
When do you think the right time is to reveal your “baggage” when you’re in a new relationship?
And is it ever ok to never bring some things up.
Do I really have to bring up that period of time, where I was wild? And if so, how long can I wait?
Hidden Baggage END_OF_DOCUMENT_TOKEN_TO_BE_REPLACED

This week is National Green Week.

Now, I am not so much into the green thing when it comes to books. I may have books on Kindle but reading them on Kindle, well not so much.

Back to my point. So, if you are reading a book (and I will not mention said book) and you get to page 86 and you still did not get into the meat of it, then something is really screwy in this equation. Here is a waste of several pages that could have saved a tree.

Now, you try and stick to it since you are, after all, in the first pages of this mystery. Nothing so far has really happened and you are anticipating lots from the reviews and the hype. Still nothing.

When 300 pages into it, it starts to get a little better, you wrinkle your nose in disgust.

And here comes my Green Week suggestion. What if we all stopped this insatiable need to devour books in the raw and just buy online writing or even join the library. Would that be an acceptable solution to you all?

After all, if more than 80% of this book (which was made into a movie, by the by) is not getting you into the place where you cannot tear yourself away from it, what is the point?

You can put up with 20% of blah blah blah blah blah, but 80% is carrying the line too far where it is borderline garbage. You expect a mystery to grab you and not let you go. Not drag you along kicking and screaming.

If you think my idea of a library card or even online reading is valid, let me know. After all, we all have opinions like we have …… and they all stink.

While the Melbourne Cup, is a public holiday, only in Melbourne do people take the day off. But, everyone in Australia , has a day off for the annual cockroach races, partly because, the races take place, on Australia Day.

According to the story of cockroach racing, which started in 1981, two men, both, from Kangaroo Point, were arguing, at the bar, called the Story Ridge Hotel, about, which of their suburbs, was home to, the biggest cockroaches.  Of course, what else.

I must add, that I am sure, since they were in a pub, they were drinking. Can we at least agree on that? Yeah, sure we can. We shall hence call them the two drunks.

So, these two drunks, to settle their dispute, caught a cockroach each, at home, on their own, and brought it to the pub.

Again, to catch, mind you, catch, a disgusting insect, like a roach, and they are big for the race, you have to be smashed, right? Bombed?

Bringing those gross things in was one thing but these delightful hammered men, proceeded to race them. No one knows why, no one knows what, prompted the decision to “race” the disgusting pests.

Now, the whole country makes this a holiday. And I thought, we Americans, come up with holidays to have days off. No Siree Bob, we do not even come close to this lovely and charming holiday that the whole of Australia celebrates together with races, beer, food, and fun in the sun.

If you do not believe me, read on. Here is a link, with  pictures. 🙂